A Touch of the Past

In 1964, high school sweethearts Andy and Micki Buist married. Coming right out of high school and both raised on farms, they had no independent occupation. Grandpa Veltema suggested raising flowers. That was enough inspiration to set them on their course. With much ambition they set up one hoop house on Dad Buist’s celery farm. Grandpa Veltema never made it into the greenhouse, as he died before they were erected. Spring 1965 was approaching and the seeds were sown. A lot of prayer went up that first year, and every year since. 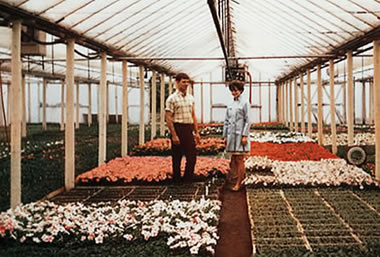 The one greenhouse became two. Land was purchased and the two greenhouses were moved to a permanent location. The two soon became five. Many additions came in the next 25 years. From 2500 sq. ft. of greenhouse space, the business grew into 170,000 sq. ft. The first two houses weren’t strong enough to withstand any more Michigan winters and had to come down. Greenhouses with stronger construction were added in the next 18 years, along with shipping warehouses, production buildings, and office spaces. With our most recent addition, we cover over 450,000 sq ft of greenhouse space, with an additional 75,000 of warehouse, production and office space.
The work load soon became too much for the family and outside help was hired. Over the years, many employees have come and gone. Through the years the quality has always remained strong. We currently have over 40 year round employees, with another additional 60 seasonal workers and over 50 merchandisers working at retail. 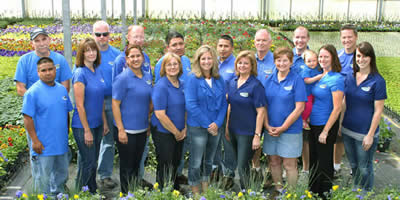 Some of the staff that works at Micandy Gardens

The flower business has made many changes in the past years. We started out with wooden slat flats, hand filling and transplanting. We now have technology that assists us in production: an automatic seeder, transplanter, soil mixing and filling machines. Shipping has changed as well. Flowers had been shipped in cardboard boxes that were individually stacked in semi trailers. Plants now are put directly on open air rolling shipping racks that are then pushed into the trailers.

Andy and Micki built the foundation for Micandy Gardens on faith, hope, and a lot of hard work. Now, their dream has turned into an abundant and rewarding lifestyle, which they have been blessed to share with their children and grandchildren. From a young age, one of Andy and Micki’s daughters, Marcelyn, has taken on her parents’ skills and passion for producing and selling flowers. She is constantly moving the company in new directions, allowing it to be always growing. The couple’s other daughter, Melynda, worked for many years alongside Marcelyn and is now a stay at home mother. Andy and Micki’s son, Randy, is still actively involved in the company’s merchandising operations, as well as a community development project and orphanage in Kenya. The Micandy Gardens’ team is dedicated to improving and sharing the rigorous work load, enabling Andy and Micki to spend time with their grandchildren and teach them a strong work ethic. The family continues to instill in all Micandy employees the ambition that Grandpa Veltema once ignited in them.

God has given us so many blessings in the past 50 years and constantly reminds us that His plans are greater than our own. Our faith in Him allows us to enjoy the magnificent beauty of watching the flowers bloom and He fills our lives with joy.